split design which causes it to slip while towing heavy loads.

Engine Number 684 spent most of its time running on the Curtis, Milburne and Eastern railroads, which later became part of the Chehalis and Western. The lines ran log trains

from Western Junction (in the Tenino area) to the Port of Tacoma. These trains made a “back-up” move when they entered the Union Pacific switch yard in Fife on their way to the Tacoma Rails main yard in the Port. Here the trains were delivered to a trans-loader for overseas shipment. This operation ran from 1980 to 1992.

In January of 2009, the City officially took possession of the former ALCO C-415 N 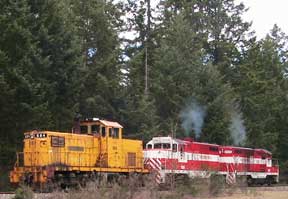 umber 684 Train Engine through a City to City transfer sale of surplus property.

This rare engine, only 26 were sold and only four survive today, is on permanent display at the Fife History Museum in Dacca Park. Engine Number 684 received a new coat of paint courtesy of CEECO in return for a few of her spare parts that won’t be needed for display. 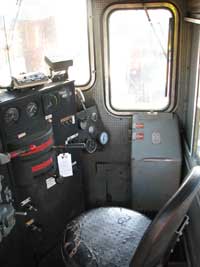 the area railroads. At some point in history Fife was served by the following railroads: Milwaukee Road, Union Pacific, Puget Sound Electric Railway, and Chehalis and Western. Today Fife is home to the Union Pacific Railroads-Tacoma Yard that serves the Port and many local industries, making Fife an important player in the region’s transportation picture.